Dogs are inferior to humans but most human beings admit that they provide superior service as faithful guards. Such (under)dogs also exist among college employees. Few such teachers were removed from teacher's council despite providing years of service. It is to be noted that most of them were very active members of the admission committee. Even some very efficient non teaching staff received extreme humiliation.

As works for examinations were going on, the 15 years old main website of the college was suspended by sending an official order. A new website was launched by copying all content from the old website including the outdated one. But the new website sported at least one new thing - photograph the the TIC herself. Communications through the official email of the college was carefully restricted. But soon it was learned that a new agency will conduct the admission process for the first semester this year. Admission committee was under tremendous pressure after this change. Another problem was that many new applicants did not know about the new website and old one was closed. Admission process started and went on with many omissions and hiccups unlike previous years but rate of enrolment was far from satisfactory. Till date it is not clear that how many students are actually interested to continue with the college. Most importantly, even after all these admissions college did not receive the fees in bank account of the college.

Meanwhile, working atmosphere of the college further degraded and all teachers of the college signed a petition to GB for removal of the teacher-in-charge. She was removed by the GB on 20/09/2021. This was published in Uttarbanga Sambad on 21/09/2021. Please note her attempt to accuse Dr. Shanti Chhetry even after all these events. 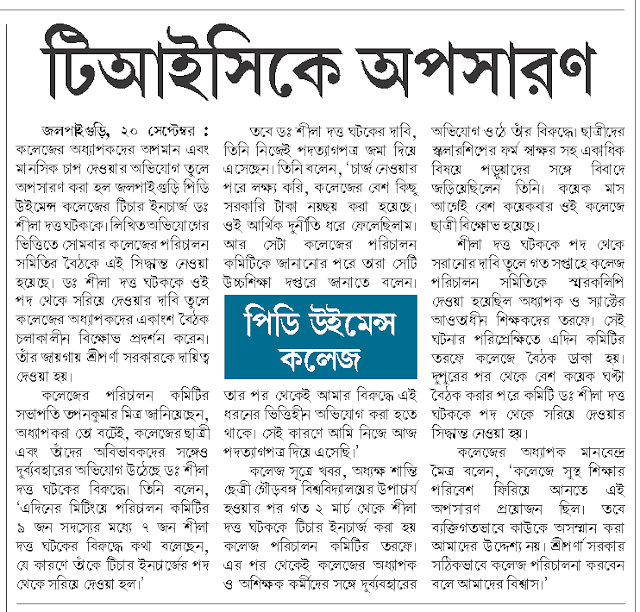 After this removal it was learnt that many important documents of the college are missing. Only verbal assurance to return them was received from the outgoing TIC till date.

Popular posts from this blog

October 05, 2021
Teachers Council bid farewell to Sri Subrata Das, Accountant of the college on 30/09/2021. Here are some moments from the occasion.
Post a Comment
Read more

October 05, 2021
This photograph was taken on 1st March 2021. Our principal, Dr. Shanti Chhetry has become vice chancellor of Gour Banga University and he was instructed to join within a very short time. Employees are bidding him farewell. Although everybody is glad for his achievement, they are also worried about the vacuum it will create. Obviously those who worked with him knew that it is no ordinary vacuum. He was an expert in all administrative works and an workaholic. Moreover he was such a leader that the laziest employee of the college happily devoted all available time and energy to complete an assigned task. Governing Body of the college appointed the senior most teacher available as teacher-in-charge. Employees who were in charge of various activities provided utmost cooperation to their new leader. Promotion of students to next semester and conducting online classes for them was the first challenge, which went well. Conducting university examinations as per the new and strange guidelines wa
Post a Comment
Read more